In 2010 Ander has obtained a BA in Philosophy at University of Barcelona (UB). In 2011 he pursued Philosophy studies with an MA in Political Philosophy at the Pompeu Fabra University (UPF), with a final thesis on The concept of self-determination in W. Kymlicka and M. Seymour: an analytical approach supervised by Dr. Requejo.

In 2013 he gained a Bussiness Administration Diploma at UB. He started a PhD in Humanities – Ethics and Political Philosophy – at UPF in 2011. He is supervised by Dr. Sonia Arribas and Dr. Daniel Innerarity. His research is focused on a normative analysis of Ulrich Becks’ Cosmopolitanism. In 2014 he obtained the Advanced LLM in Legal Sciences at the UPF with a thesis on the articulation of diversity and universality at the European Court of Human Rights, supervised by Dr. González-Pascual.

He is finishing his PhD and he has been a Visiting Student at the Department of Politics and International Relations at Oxford University from April 2016 to July, 31st 2016. During his visit to Oxford he has revisited the idea of shared sovereignty in light of the Theory of Demoicracy mentored by Professor Kalypso Nicolaïdis.

He has been working at the Basque Institute of Democratic Governance since 2013, where he has organised several conferences, publications, and research activities. In July 2015, he attended a summer school organized by the International Summer Research Institute hosted by the European Academy (EURAC) in collaboration with the Institute for Studies on Federalism and Regionalism from Canada, organised by Professor Alain Gagnon in Bolzano, Italy. The topic was Politics in Fragmented Polities: Cohesion, Recognition, Redistribution, and Secession.

Finally, he is also very much interested on active participation in society as well as scientific dissemination. On the former, he has published several opinion articles on local and international newspapers (Grupo Noticias and Basque Tribune). He has participated on both local and national radio programmes. On the later, he is a member of The GISME Group at the UB since 2010. The group is directed by Professor Tejada. As a member he has organised several dissemination activities, including collaborations with the Prado Museum, the Spanish Foundation of Science and Technology or Jakiunde (the Basque Academy of Science and Humanities). He is the Project Manager of the SIforAGE Project on Social Innovation for Active and Healthy Ageing for Sustainable Economic Growth. SIforAGE is founded by the European Commission under the 7th Framework Programme. 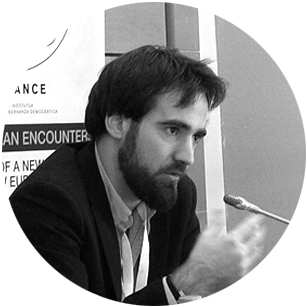